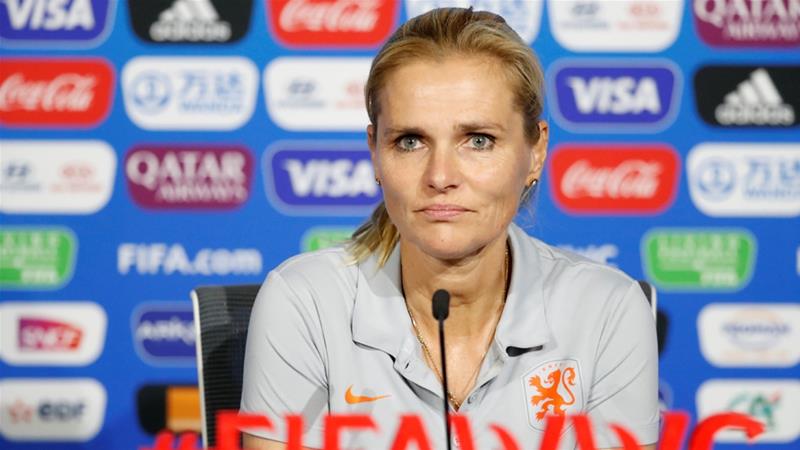 The United States faces the Netherlands in the Women’s World Cup final in France.

The Dutch have entered almost every game as the favourite since winning the European Championships in 2017, but for Sunday’s final in Lyon they are clearly the underdog.

Winning the final, which starts at 15:00 GMT, would give the US side a second straight title and their fourth overall, more than any other nation.

“We all know that America is the favourite. We have a lot of respect for them, but we are not in awe,” coach Sarina Wiegman told reporters on Saturday.

US star Megan Rapinoe said she felt like a “kid in the candy story” at the tournament. “This is the absolute best stage. I already feel more anxious and more nervous than in any of the other games.” 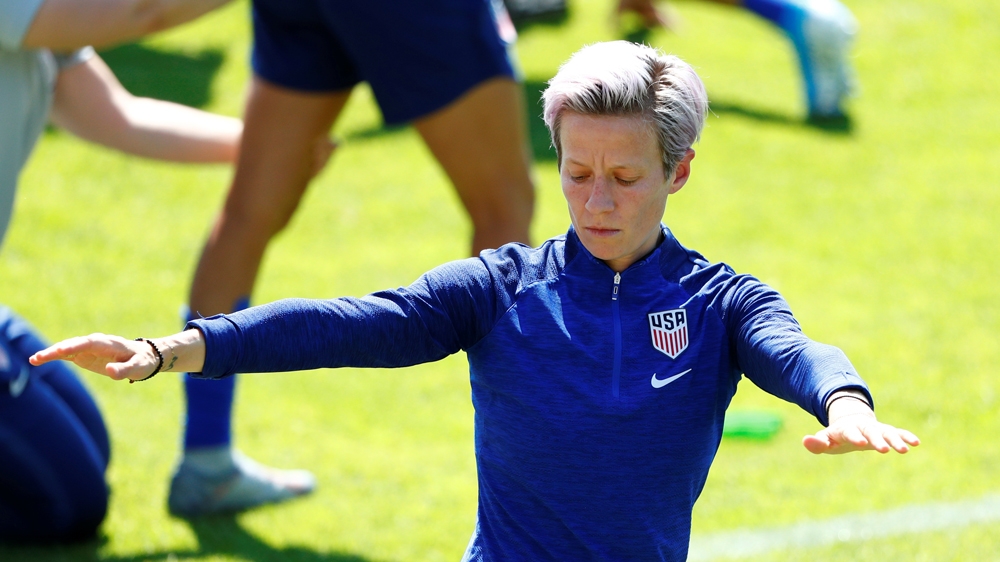 Megan Rapinoe of the US during training [Emmanuel Foudrot/Reuters]

“We’ve celebrated the amazing moments. We’ve dug in, looked each other in the eye in the hard moments and gone through things as a team,” Rapinoe said. “And we get to this final moment and it’s one more game and it’s really just about experiencing that game in its fullest for the last time.”

Dutch on the rise

The US side face a Dutch team on the rise. After reaching the knockout round in only its first World Cup four years ago in Canada, the team won the European Championship for the Netherlands’ first major trophy.

Dating back to the Euros, the Dutch have won 12 straight games in major tournaments.

They have star power in Lieke Martens, who was the FIFA Women’s World Player of the Year in 2017. She scored twice in the team’s 2-1 upset victory over Japan to open the knockout stage but she injured a toe in the celebration and it’s bothered her ever since. 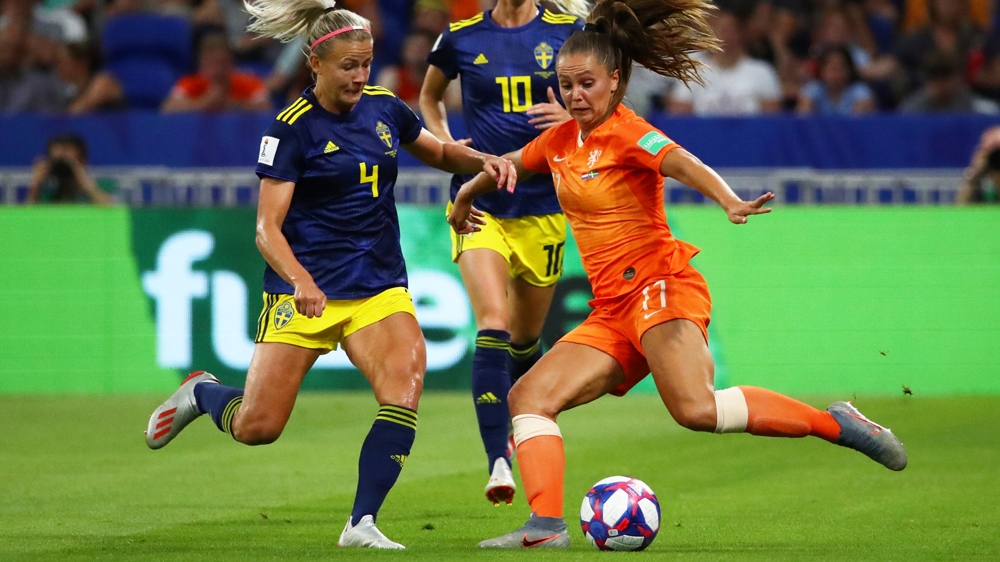 In the Netherlands’ 1-0 extra-time victory over Sweden on Wednesday in the semifinals, Martens said it was painful.

The US defeated England on Tuesday night in its semi, giving the Americans an extra day to recuperate.

“As a player, you always want to play the biggest game of your career and this one of the biggest ones I hopefully am going to play,” Martens said.

Jackie Groenen, who became the first overseas signing for Manchester United after the recently formed women’s team was promoted to England’s Super League in May, scored the lone goal for the Dutch against the Swedes.

“We never knew this would be possible. It is one more match and we could be world champions. It will be difficult but it will be incredible to win.”

The top-ranked US side pose a considerable challenge for the eighth-ranked Dutch.

The US had a particularly challenging run to its third straight World Cup final, with a quarterfinal meeting against No. 4 France before the semi against No. 3 England. They won both games 2-1.

The team had been strong from the start, announcing their arrival in France with a 13-0 trouncing of Thailand in the opener. Along the way, the US side also vanquished nemesis Sweden, the team that knocked them out of the 2016 Olympics in the quarterfinals.

“I think we’ve come from a tough road in terms of the teams we’ve played to get to this point, so for sure they’re battle tested. But what I love about this group is that they’re locked in and they’re still hungry,” US coach Jill Ellis said.

Alex Morgan leads the team, and the Golden Boot race, with six goals. Rapinoe has five, including four in the knockout round, but she did not play against England because of a minor hamstring issue. She said she expects to be ready for Sunday’s match. Ellis said no one has been ruled out. 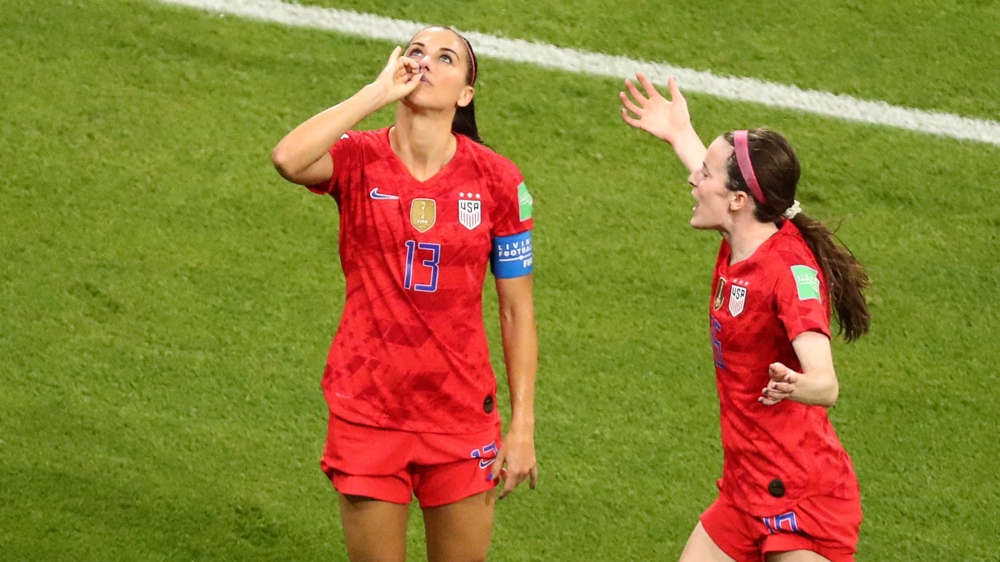 “I feel so good about this group,” Ellis said. “They have a closeness that you’re optimistic to have as a coach but it doesn’t always come to fruition. This is a very, very close group, and I think that’s been a big part of what’s empowered them to this point. And obviously I think we’ve got talented players as well, you can’t do without that.”

The teams share a commonality in that both have female coaches, with Ellis guiding the US and Wiegman in charge of the Netherlands.

It’s the first time since 2003 that two women have matched wits as coaches in the World Cup final.

The most recent meeting between the two teams was in September 2016. The United States won 3-1 in Atlanta.