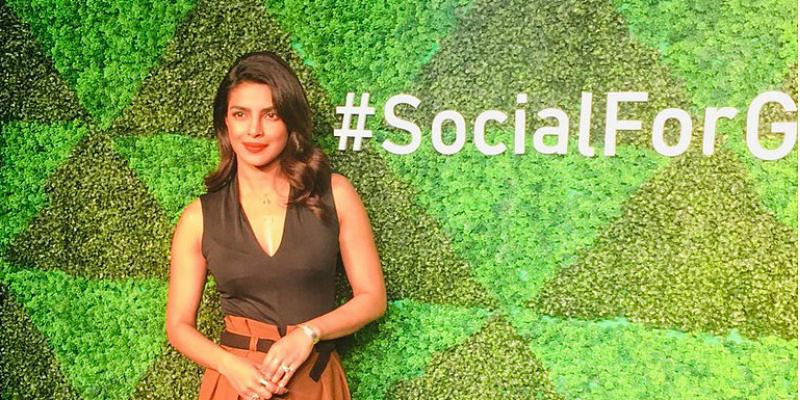 We all know what Priyanka Chopra did last night, and the day before, and before that.The India-born global star is consistently in the news because of what she does and it’s there on social media for all to see.

Whether it’s the PDA with husband Nick Jonas, her vacation with family, her mother’s birthday or her humanitarian efforts, our desi girl is a social media star.

It comes as no wonder then that Priyanka Chopra has topped Hollywood Reporter’s Global Media Climbers Chart for the third time in four weeks, just because she has been buzzing all over the internet. When she gives us a sneak peek into her life, the internet goes berserk, and PC, as she is fondly called, immediately goes viral.

The actor replaced previous winner Dwayne ‘The Rock’ Johnson who is now at a poorly number six. Hollywood Reporter judges social climbers on the basis of how popular they are on social media platforms like Facebook, Instagram, Twitter, and YouTube with data provided by social media analytics company MVPindex.

So what’s it about Priyanka Chopra that attracts the shares and likes in huge numbers? A peek into her hugely popular Instagram account will give us the details. For one, there’s all this PDA with husband Nick Jonas that shows they are madly in love. Also, her vacation goals – whether it’s sunning by the pool or chilling with friends. Take this picture, for instance. It garnered over over two million likes within a few days.

But there’s also another side to Priyanka Chopra, where she shows she cares.

The truth is quite simple…the future of this world lies in the hands of the children of today. But the harsh reality is that there is an entire generation of innocent children growing up right now without any prospects for thier future…these children are affected by displacement due to serious conflict and emergencies in thier various regions. When families are forced to leave their homes due to violence, persecution, and natural disasters, they are torn apart and it's the children that end up suffering the most. The numbers are staggering, yes…but we have to continue to stand for them, in whatever capacity we can as individuals. They are the future and we need to help. Join me and @unicef by clicking the link in my bio to help keep refugee children safe. #AChildIsAChild #WorldRefugeeDay

The above video speaks of her association with Unicef and the need to keep refugee children safe. This post had over 4.5 million views and shall hopefully make an impact on whoever has liked and promoted it.

Though things have been a little quiet on the acting front after Quantico, she will soon be seen in The Sky is Pink, a Hindi-English production directed by Shonali Bose, which portrays the love story of motivational speaker Aisha Chaudhary’s parents.

Priyanka termed the role as a “hardest, loveliest experience”.

Until we wait for the release, PC will keep us excited, thrilled, envious, and guessing – all on social media.