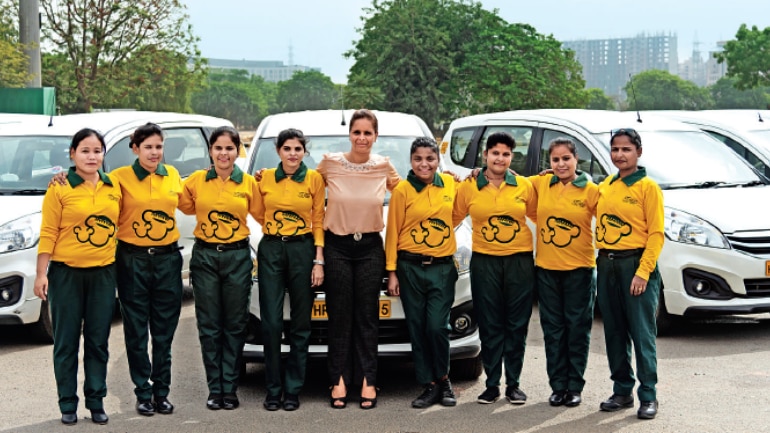 Shailja Mittal, the founder of Koala Kabs (centre) with her team of women drivers.

The capital’s alarming crime rate has, among other things, made it especially unsafe for women. Statistics show these rates have only increased during the past decade and as a result women travelling alone, or with young children, always think twice before getting into a cab driven by a man at night. As a result, ventures such as exclusive women cab drivers for women, families, and the elderly, have been initiated in the past few years.

“When we were working on the concept, we zeroed down to one thing that our service is all about care and that motherly instinct while ferrying passengers on roads,” said Shailja Mittal of Koala Kabs, a private initiative she started with Aarti Gautam.

Mittal agrees that the current state of safety is very questionable and people need to collectively work on it. It was actually the safety of her now 11-year-old daughter that encouraged Mittal to create Koala Kabs in 2017.

“One day her regular cab driver didn’t turn up and an alternate driver was sent to pick her up. I still get gooseflesh thinking how can we can handover our kids to a complete stranger? That’s when I realised this is probably the need of the hour,” said Mittal.

“Women and kids need a safer and a more trustworthy companion on roads as we can’t always be present with them to take care of them. There has to be an alternate ‘mother’ in absence of the real one”.

Shailja Mittal, the founder of Koala Kabs (centre) with her team of women drivers. Kareena Fernandez* is a young mother who agrees. She says she only wants a “woman driver who is literate, well-mannered, and a reliable vehicle driver” for her kids because it is easier for her knowing they can ride securely to school.

Dr Charu Mehta* adds that “safe rides with lady drivers will help reduce stress in mothers with young children, [especially] daughters who have to go out for studies and for work”. IT TOOK Mittal and her team five months to research in order to take it live on the Delhi NCR roads. Two years later, they now cover the complete area and soon they will be expanding to other cities as well.

They will first target the metro cities, she said. Koala Kabs today has a fleet of 15 cars and 17 drivers and they aim to expand it to 100 by the end of the year 2019.

The service, however, allows men on board if they are with women and family. At the same time, all drivers at Koala Kabs are thoroughly vetted and qualified. They all need to clear a three-stage driving test, first by operations team, second by Mittal’s partner Anmol and third by her, along with basic knowledge of using navigation systems.

However, she insists her drivers should have a sense of the city and they shouldn’t solely rely on navigation apps to drive and the basic sense of responsibility and sense to be helpful while ferrying passengers.

“I was so glad I was able to get the training to drive here after my older brother fell ill and my mother said I shouldn’t work,” said driver Parvati, 24. “It was only when my cousin persuaded my mother that I too should train as a driver that she agreed. I have been here for two years, and I like it. It’s not just the money I make but I feel better knowing that my passengers are only families or women, and that the men I drive are always with families, or a woman.”

Ferzana Syed*, an official in a state department, uses Koala Kabs and also Sakha cabs. “These cabs are truly great initiatives not only because they provide safe transport to those who need it the most but are also a source of employment to women who are from economically weaker sections,” said Syed. The latter was the reason why Sakha cabs was founded in 2008 with the non-profit Azad Foundation as its partner, which came up with the ‘Woman on Wheels’ concept.

“These women are mobilised from the poor and marginalised sections of society, and their entire training and development is undertaken by us,” said a representative of the foundation.

“They receive training at the Maruti Institute of Driving and Technology Research as well as from Azad Foundation’s in-house trainers. In addition to driving, they are taught self-defense by the Delhi Police’s Crime against Women Cell so they can deal with any untoward incident they may face on the roads.”

Rigorous training in map reading, routes and roads in Delhi and communications has also been provided to the 700 Sakha women drivers.

“My office timings are very erratic. Sometimes I finish at 5.30pm, sometimes by 9pm or even later,” one Sakha passenger told Mail Today. “It’s just less stress when I am with a female driver.”

Driver Shanti said everything changed for the better when she joined Sakha.

“My husband left me and our three daughters a few years ago. I was relieved as he was violent at times. But the only jobs I was able to find had little guarantee or leave or salary,” said Shanti. It was a friend who introduced her to Sakha Cabs. “I joined here hoping to learn a skill and get a job as a driver. But after talking to the people who worked at the foundation, I found a space where I could realise I had different choices.”

Sakha also works with the Delhi Commission for Women to assist women who dial the 181 women helpline number. But the service is available only in Delhi and Jaipur with plans to expand in Kolkata and Indore. Former British Prime Minister David Cameroon, Dutch prime minister Mark Rutte, and the Duke and Duchess of Cambridge have interacted with Sakha employees. Actor Aamir Khan too is a supporter.