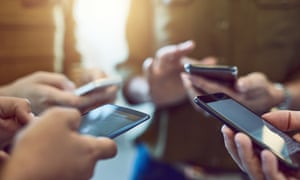 Lots of people tell me they don’t read the news any more. Lots of people tell me they can’t believe what is happening: that Donald Trump may get another term, that Boris Johnson will almost certainly soon be prime minister, that we may crash out of Europe. They tell me earnestly that someone they know who voted leave now wishes they hadn’t, so a second referendum will be a remain landslide. Or they tell me Jeremy Corbyn will make it all better. Or that they have never met an antisemite. Or that white, working-class people (who all live up north) are to blame for everything. Or that it is the fault of Eton’s spawn, or the mainstream media, which of course is me. I am actually related to some of the people telling me these things.

Often, I suck it up. After all, journalism is 90% listening – the rest is just showing off. Then, gratefully, I return to my bubble and wonder what it will take to burst theirs.

It is common now to gather online with those who think as you do. Social media is said to be responsible for this extreme polarisation of views. Here, you can hang out with those who will reinforce your worldview by adding their own frisson of outrage, even if that view is that the world is flat. Don’t @ me, by the way, because I will block you. That is my prerogative. This mode of being has moved from online to the real world: many people behave as though they can block their fellow citizens.

This is the lesson of Brexit, which has brought about a maniacal state of affairs in which anecdotes have replaced data and dishonesty is not merely tolerated but applauded.

Trump says racist things, yet parts of the media are too cowardly to call them racist. Johnson lies, yet his mendacity is compared to clowning. Liberals may despair – to each other – but these are the same liberals who discuss the “white working class” and won’t see the working class as multi-ethnic; they are the same liberals who didn’t see Brexit coming, the same liberals who promised to leave Westminster more but never do. So, forgive me if I don’t pay them much attention, for I know I am part of that bubble. Indeed, when I went to work for a more rightwing newspaper – I was ostracised by part of the left – it was because I have long believed it is important to talk to Conservative voters, because I believe politics to be about persuasion. Changing hearts and minds and all that jazz.

Now, however, the bubble machine creates a politics of purity: either Corbyn is the second coming, or – as the millennarian cult of the crazed Brexiters would have it – Brexit will herald utopia. Both are delusional.

So, I take solace in the idea that we may, through contact with reality, at least lance some boils. But this can’t be done by shutting down people who think differently from us. An article in the Atlantic, which used research from the University of Pennsylvania, found that “white, highly educated people are relatively isolated from political diversity”. The most politically intolerant area in the US appeared to be Suffolk county in Massachusetts, which includes Boston: urban, educated, with few “cross-cutting relationships”. In parts of the south, however, such as in North Carolina, you are more likely not only to have a neighbour who thinks differently from you, but also to marry them.

What can we conclude except that people are complicated? That those who blather on about being “woke” do so in ever smaller circles. Echo chambers thrive on constant denunciation of those with impure thoughts. They are not about trying to change people’s views. This may be heaven for narcissists, but it is a form of hiding disguised as engagement. Emily Thornberry revealed last week that, when she was campaigning for remain, other Labour MPs would board the remain bus to campaign in other constituencies “because they didn’t want to campaign in their own”. Incredible, isn’t it?

I am not telling anyone to be mates with racists or stop being leftwing. I am just asking that we be less comfortably numb. The result of not speaking to those who don’t inhabit our precious bubbles will confront us this week in myriad ways.

Political purity has lead to an unholy mess. One tiny prick – our soon-to-be prime minister – will burst the biggest bubble of all.