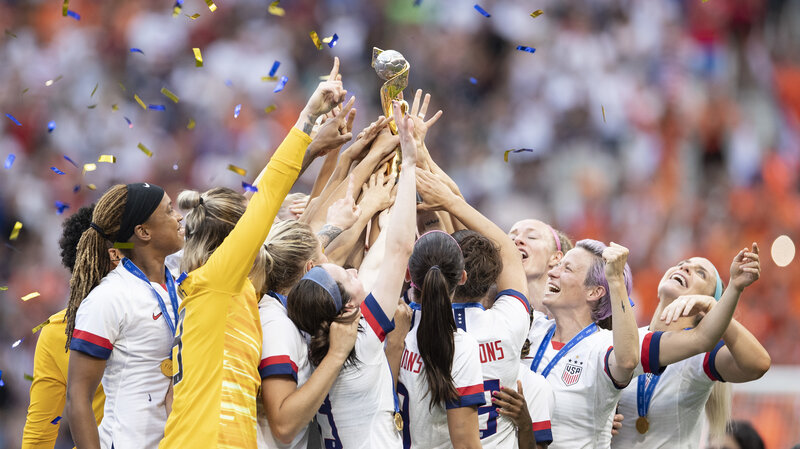 The celebration of the Women’s World Cup soccer championship shifts this week from France to New York City. On Wednesday, the U.S. Women’s National Team will be honored with a ticker tape parade and keys to the city, following its 2-0 win over the Netherlands in Sunday’s final in France.

But amid the celebration, the women now turn their focus back to a more serious matter. A gender discrimination lawsuit, filed before the tournament, demands pay equal to that of their male counterparts. And legions of U.S. Women’s National Team supporters say a fourth Women’s World Cup title makes the case even stronger.

In the stadium near Lyon, France, on Sunday, it didn’t take long for the pivot.

From joy to indignation.

As U.S. players hugged and celebrated their hard-earned victory over a tough Dutch team, chants of “equal pay” bubbled up from the stands. There was booing too — for members of FIFA, soccer’s international governing body, which reportedly will pay the U.S. women a $4 million bonus, compared with the $38 million paid to last year’s World Cup winner.

From fans to players, the message was clear.

“To have our ladies represent and show that our soccer program is superior, it should inspire the United States to pay these women what they deserve to be paid,” said Kenneth Lloyd, from Austin, Texas. He watched the game in France with his son and daughter.

Megan Rapinoe, the outspoken U.S. winger, won the Golden Ball award, given to the tournament’s MVP. But after the match, she assumed her other role as outspoken plaintiff in the class action suit filed in March against U.S. Soccer, the sport’s governing body in the United States. The suit was brought by U.S. players, but Rapinoe says everyone at this Women’s World Cup helped push the fight forward.

“All players, I’m saying every player at this World Cup, put on the most incredible show that you could ever ask for,” Rapinoe said. “We can’t do anything more to impress, to be better ambassadors, to take on more, to play better, to do anything. It’s time to move that conversation forward to the next step.”

The next step is mediation, as the members of the U.S. women’s team and their federation try to resolve issues of equal pay and better working conditions.

On the surface, resolution seems easy.

Pay the U.S. women what the U.S. men make. Look at the women’s success versus the men’s lack thereof, amplified on Sunday. The women won their fourth Women’s World Cup title, while the men lost in the final of a regional tournament. In 2017, the men failed to qualify for the World Cup for the first time since 1986.

And look at what the teams earn for their federation.

“It’s a complex topic,” McCann says, adding, “It’s not as straightforward as I think it’s depicted.”

McCann directs the Sports and Entertainment Law Institute at the University of New Hampshire’s School of Law. He says there’s not a clear consensus on a lot of the issues involved in this dispute.

“The two systems [for paying women and men] are designed differently,” McCann says. And the systems were structured through separate collective bargaining agreements.

“The men’s system pays players when they play, through bonuses, whereas the system for women’s players has guaranteed pay and also pays for certain bonuses as well. But it’s structured differently.”

Also, the teams play different numbers of games, and that has an effect on revenue as well.

So with all these complexities and moving parts, is the popular perception that the U.S. women are grossly underpaid compared to the men accurate?

According to an article in The Washington Post, the women are paid less sometimes. The biggest pay discrepancy does appear to be in World Cup bonuses, mentioned earlier.

McCann says the lawsuit remains on the docket while mediation goes on, but the litigation is effectively suspended during talks. If mediation fails, he says, [the women] resume their litigation.

Part of a larger story

Emily Martin is watching what happens from her position at the National Women’s Law Center. She’s vice president for education and workplace justice at the NWLC, and she sees the women’s fight as part of a broader, reinvigorated women’s movement of the past couple of years.

“This should be seen as connected to the Time’s Up initiative,” Martin says, “where so many women in the entertainment industry and beyond stood up and said, ‘We aren’t going to sit around in the face of inequality anymore. We’re demanding our due.’ “

“I think it’s connected to the Me Too movement, where so many individuals shared their stories and said it’s time to really fundamentally change how we treat victims of sexual violence in this country.”

“And it’s connected to the Women’s March, where so many women literally took to the streets to say the status quo isn’t good enough and it’s time for a change.”

Even if the pay gap between the U.S. women and men might not be as glaring across-the-board as is often depicted, Martin thinks women everywhere in this country, whatever their jobs, should pay attention to the case. She says when you compare women and men who work full-time, year round, women are paid about 80 cents for every dollar paid to men.

“I do think it will inspire individual women to come forward and say, ‘Pay me what you owe me,’ ” Martin says. “I also think that when you see this kind of high-profile excellence fighting for equal pay, this is an important prompt for lawmakers … both on the state and federal level … to do the same.”